I finished ‘Lean In’ the book by Sheryl Sandberg, COO Facebook, which both explores and implores women to step towards challenges they face in the workplace. I found the book to be highly insightful and encouraging; on a practical level, it inspired me to reach for goals that subconsciously I had felt were beyond my reach. 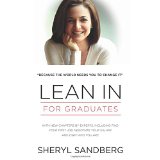 1. Striving to fit in – How women strive to fit in to a male environment and thus deny female qualities and the dimension this brings to the work environment.

2. Tokenism – How women cope by being one of very few women in a particular environment – and how this may create a ‘Queen Bee’ situation which pits one woman against another.

4. No training programmes that discuss gender / gender stereotypes – a point which highlights how often this real problem remains unaddressed in the workplace. This is the same where workplaces ignore the need to educate staff about diversity issues and the impact of culture on interaction styles.

5. Stereotypes – can demean, marginalise, belittle and generalise. How negative stereotypes these can be internalised by all – both men and women. Sheryl discusses how women are often depicted as ‘bitching’ of one another and how this actually avoids the underlying issues. I am certainly aware first-hand of the burden of negative stereotypes of ‘black’ people and how damaging and limiting this can be on a personal and professional level.

6. Immaturity or Blind-sidedness- not a term particularly used by Sheryl but none the less it describes this leaning towards focussing on our differences – to our detriment rather than our similarities (and we are more similar than we are different). It does seem that there is an obsessional over-focus on our differences as people rather than what unites us!

8. Majority Male – as most bosses are male, how confident and competent are they to discuss gender issues and effectively lead change in these areas? Knowledge comes from lived experience of the issues. Whilst most bosses remain male and white and able-bodied, the same problems will persist.

9. Privilege – most males do not see the advantages they enjoy based on their gender status alone. The same can be said for other diversity factors.

10. Will to scrutinise – we all need to be open to appraise our own behaviours and commit to growth regarding our bias in order to tackle this issue of gender/ race / other diversity factor bias.

If you have experienced gender discrimination in the workplace, this book will be an eye opener which articulates well the unspoken words of your experience. Often discrimination can be subtle, it can be assumed, it can be overt and at other times it can be taken for granted – only when we stop and think do we consider that actually we are not all together comfortable with ‘this or that’ behaviour or comment (and then the moment has passed). This is something that happens all the time.

This blog will have stirred some thoughts, so leave your comments below….

What now? What can we do?
Read the book – Sheryl makes some practical suggestions in the book; we can form networks of women and support each other. Sheryl has formed ‘Lean In’ circles. See here for more information.
Training Program: The book has inspired a new training program called ‘New Focus on the Familiar: Understanding through Diversity’ – a training program that uses our lived experiences of discrimination to promote understanding regarding diversity factors.

The twelve days of Christmas and the accompanying twelve kinds of people to avoid (each day) for a Stress-free Christmas
I could not find a more suitable image to accompany this blog, so I thought instead this image of twelve donoughts would suffice; you can reward yourself each day with
What does ‘resilience’ mean for Occupational Therapists (OTs) in the modern workplace?
In 2014, with a group of Occupational Therapists (OTs), I designed and circulated a survey in order to gain a range of qualitative experiences on this topic which could be
Professional Self-Leadership in the workplace
Foreward: This blog was originally written for a newsletter which supports the professional development of Executive Personal Assistants. However, it is applicable to a range of professionals. I define Self-Leadership
Work Smart: Ten reasons to beat procrastination once and for all
We can all suffer with putting things off from one time to another. Sometimes it can be over the smallest of things and at other times it can be over
‘Speak to us of Work’
I love this beautifully written piece – and wanted to share it with you. It gives us an inspired take on what it really means to work, and what we
Working your power: Using your voice #2
The purpose of this blog is to acknowledge how it is possible for people to be silenced – be it at work or in any situation where there is a
Do Vision and Mission Statements Work?
I have worked with so many organisations which although they have mission and vision statements in place- do not actually live by or follow them. Usually the staff do not
Working your pitch at networking events
Networking is key to running a successful business. Why? Well networking is an opportunity to get ‘out there’ and and tell people about your services. You cannot get customers if
The Top Five places- to go for help with Work issues
This blog is for those people facing problems at work and want to know where they can find out information and get support. Below I summarise five key organisations that
Book Review: Changing Vampires in the Workplace into Angels
I have just been reading this book: Changing Vampires into Angels’ by Maria Paviour. The book talks about the different types of relationships we can have with people. In particular,