Working your power: Using your voice #2

The purpose of this blog is to acknowledge how it is possible for people to be silenced – be it at work or in any situation where there is a power differential. I make specific reference to the Hillsborough disaster of 1989. This blog is not intended to be an indepth exploration of the events on the day but it has been inspired by Hillsborough  and the justice that has been achieved for the victims and their families this year.

People whom are powerless traditionally include the poor, minority groups, women, disabled, etc. Powerful include the rich, white races, men and people that don’t have disabilities.

However, the perpetrators in this case, were the police and the victims were local people who had come to enjoy a game of football – they were not celebrities, or people with ‘influence’. Most of them were white people – both perpetrators and victims. What transpired was a disgraceful abuse of power on the part of the police; they chose to blame the football fans for the deaths of 96 fellow fans (men, women and children) – deaths that were as a direct result of the polices’ mismanagement.

The football fans and their families fought for 23 years to get justice for their loved ones and to ensure the truth came out. Every step of the way the police continued to justify their actions (lying all the while). 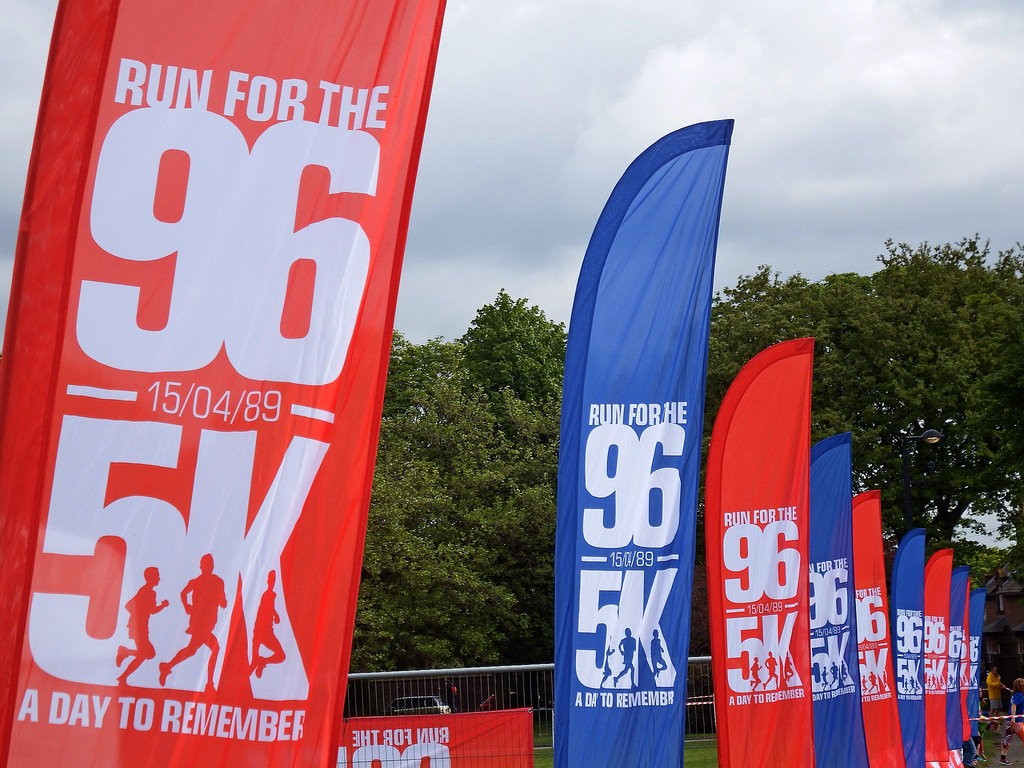 The disturbing truth at work

The most disturbing part is that the police were able to successfully uphold a lie, despite camera footage, and testimonies of thousands of people to the contrary. So how was this possible? Simply put: those in power colluded to protect each other and hide the truth. All resources were used to uphold the lie:

‘Lord Justice Taylor expressed [further] concern that the police had initiated a vilification campaign directed towards Liverpool fans. Widely published allegations had included drunken fans urinating on police officers and on the bodies of the dead and stealing from the dead.’

And all this was possible because the police are the police – in the highest possible position of power; supposedly guardians of the law. So they could abuse this power. With no safeguards to ensure that they were acting responsibly.

But what drives such behaviour? Some factors include:

And all of this is a shame on humanity; that we can treat eachother this way.

And get away with it for so long.

And seek to defend such disgraceful behaviour – despite the pain and absolute anguish it causes. 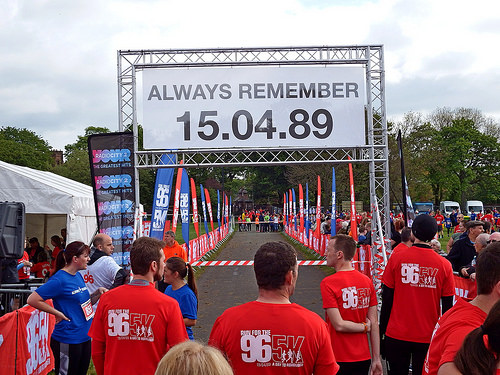 The greatest shame of it all is that amongst those that were lying, some would not have wanted to – but they would have conformed; feeling powerless to ‘go against the grain’; to ‘blow the whistle’ (– for this takes courage). And with this would have come pain and anguish – for to watch 96 people die – leaves it’s mark on you. A mark that ALL present have lived with for 23 years. Indeed many police officers sought compensation for trauma in so far as they were secondary victims to the events on the day.

So why, out of all the police that were present – and were witness to all that happened on that fateful day- did not one of the guilty stand up and say: ‘it’s all a lie, the police were responsible, and I for one, am sorry’. Read more about standing up above the parapet in this blog: ‘Using your Voice #1’.

An excerpt from the Hillsborough Independent Panel:

‘It was soon realised that many people were injured, some fatally. A tragedy was unfolding, witnessed by over 54,000 people inside the stadium, television and radio broadcasters, numerous journalists and press photographers, and recorded on CCTV.’

The fact is that in situations like this; people collude. The same is true for managers that were found guilty of abusing their power in the case of the Mid – staffordshire enquiry into mis-management in the NHS.

And this gets me thinking about all the other situations and scenarios where it has been the word of the lay public against another person of power and influence – and how the truth could have been manipulated in those situations too. And the pain this causes to innocent people. And not just them – their families too. In both medical and psychological ways. Needless pain. In addition to the 96 people who lost their lives on that fateful day, the Independent Inquiry states:

‘…162 were treated at hospitals in Sheffield and Barnsley, many more were traumatised and the families of those who died and survived were changed forever. Others have died prematurely, their deaths probably hastened by the physical injuries or psychological suffering endured at Hillsborough and its aftermath.’

And with each corrupt act on the part of the police, each act that went un-investigated or without application of sufficient disciplinary processes, it made the events at Hillsborough all the more possible.

It is of course worthy of note, and sad to realise that the police officers involved were also local people. Some are likely to have known the people affected by the events of Hillsborough. And one would wish therefore that they would have been similarly invested in seeing justice be served rather than, as has been reported; being adversarial in the process.

‘Sixty-five police officers gave evidence to the Inquiry and LJ Taylor considered the ‘quality of their evidence’ was ‘in inverse proportion to their rank’. Some junior officers were ‘alert, intelligent and open’ witnesses and as the disaster was happening ‘many… strove heroically in ghastly circumstances’. Most senior officers, however, ‘were defensive and evasive witnesses … neither their handling of problems on the day nor their account of it in evidence’ demonstrated the ‘qualities of leadership expected of their rank’. 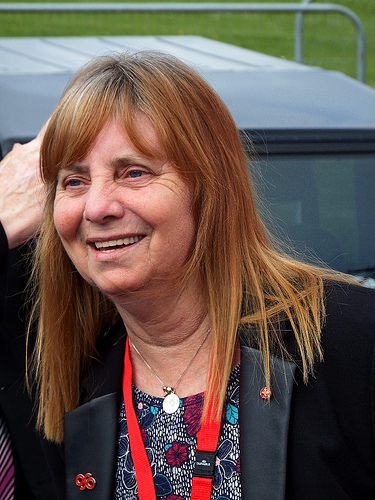 The reason that justice was achieved for the Hillsborough victims and their families, is because of the persistence, dedication and commitment of the Hillsborough Family Support Group and the Hillsborough Steering Committee. They brought private prosecutions, they campaigned relentlessly – to their MPs, to the Home Secretary and much more.

Do you see these patterns alive in your workplace?

So How about you? What ways to stand up (in situations when others would not) have you experienced? I would love to hear your thoughts.

Awele is an experienced trainer who has worked nationally and delivered training for over 300 delegates – working successfully with over 30 companies and organisations. See here for more information on the range of CPD accredited training services Awele provides.

From goal setting, and planning skills to resilience and stress management, Awele has experience designing and delivering a range of programmes. If you have particular training needs, then do enquire to see how Awele can be of support to you. Workplace stress is not something you have to live with, contact Awele and make stress at work a thing of the past.

The twelve days of Christmas and the accompanying twelve kinds of people to avoid (each day) for a Stress-free Christmas
I could not find a more suitable image to accompany this blog, so I thought instead this image of twelve donoughts would suffice; you can reward yourself each day with
What does ‘resilience’ mean for Occupational Therapists (OTs) in the modern workplace?
In 2014, with a group of Occupational Therapists (OTs), I designed and circulated a survey in order to gain a range of qualitative experiences on this topic which could be
Professional Self-Leadership in the workplace
Foreward: This blog was originally written for a newsletter which supports the professional development of Executive Personal Assistants. However, it is applicable to a range of professionals. I define Self-Leadership
Work Smart: Ten reasons to beat procrastination once and for all
We can all suffer with putting things off from one time to another. Sometimes it can be over the smallest of things and at other times it can be over
‘Speak to us of Work’
I love this beautifully written piece – and wanted to share it with you. It gives us an inspired take on what it really means to work, and what we
Do Vision and Mission Statements Work?
I have worked with so many organisations which although they have mission and vision statements in place- do not actually live by or follow them. Usually the staff do not
Working your pitch at networking events
Networking is key to running a successful business. Why? Well networking is an opportunity to get ‘out there’ and and tell people about your services. You cannot get customers if
The Top Five places- to go for help with Work issues
This blog is for those people facing problems at work and want to know where they can find out information and get support. Below I summarise five key organisations that
Book Review: Changing Vampires in the Workplace into Angels
I have just been reading this book: Changing Vampires into Angels’ by Maria Paviour. The book talks about the different types of relationships we can have with people. In particular,
Bullying at Work is here to stay…?
I reviewed the newspapers: The Metro and The Standard, in November 2015 and came across two particular articles which spoke about workplace bullying and the costs to industry. Sadly, services